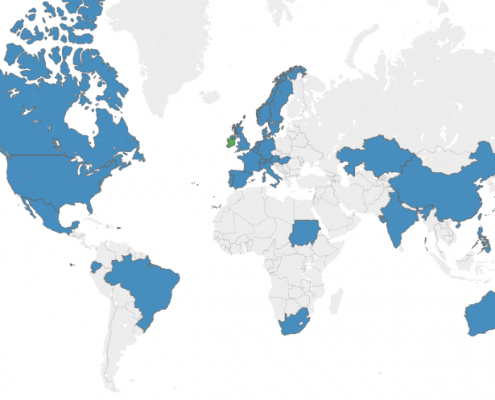 The first week of June in 2016 bore witness to the 35th annual International Energy Workshop (IEW) hosted in Ireland’s own University College Cork. The annual IEW event has been held across the globe, stretching from Beijing to Washington, to Abu Dhabi, to Cape Town, before being held in our very own rebel county. The workshop brought together some of the best and brightest minds in the area of climate science, economics, and energy forecasting to discuss the future energy needs of our planet and what needs to be done to prevent CO2 emissions from spiralling out of control. The international nature of the event meant that delegates had to travel long distances and emit a lot of CO2 to attend; at the same time, the event was supposed to be addressing how not to emit a lot of CO2… so this workshop decided to try something a little different to its predecessors: go carbon neutral.

If you travelled for 100km, making the trip in a plane as compared with a car would actually emit less CO2 – taking a bus or train would prove better again. As it turns out, our participants from China weren’t so eager to take the Trans-Siberian railway to Cork, so they had no other option than to fly a 20,000 km round trip. These return flights emit nearly 2 tonnes of CO2­, which is about the same amount as the average Irish driver would emit in a year in a brand new car[1]. And this is only for just one passenger; the combined travel of all delegates meant that nearly 80 tonnes of CO2 was emitted in just getting to Cork.

To offset these emissions, the hosts of IEW looked at a range of options to make the event as green as possible. While there are many ways to reduce the carbon associated with organising a conference (we’ll get to these in a sec), the most obvious way to go carbon neutral is to plant some trees. During online registration, conference delegates had the option to contribute €5, €10, or €25 towards afforestation for greening the event. The sum of these contributions were passed on to the good folks at WeForest, where every dollar donated means a tree will be put in the ground – and in the case of IEW, these trees were planted in the western region of the Sao Paulo state, Brazil, in a project which employs locals to plant and care for the trees. The contributions were able to provide funding for 500 trees to be planted, which would offset close to 37 tonnes of CO2 over 10 years – or half the level of carbon created by those travelling to the workshop. To cover the rest, the conference organisers approached the Irish forestry board, Coillte, who kindly agreed to plant 2 hectares of trees to offset more than the remaining Carbon emissions, which as it turned out was more than enough to offset the remaining travel emissions associated with the event.