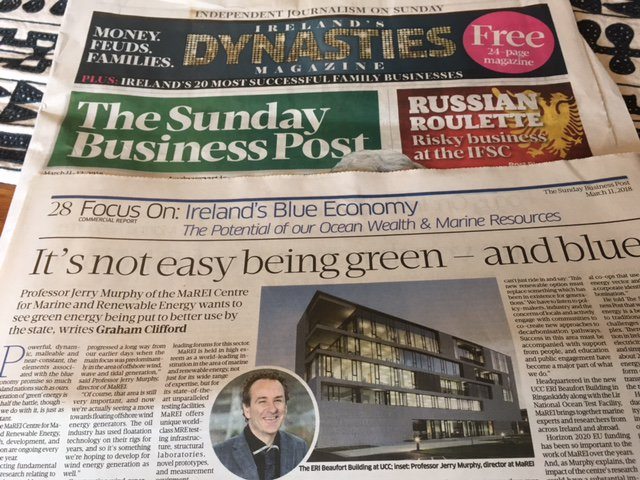 Prof Jerry Murphy, director of the MaREI Centre in Cork, wants to see green energy being put to better use by the state.

Its not easy being green…and blue

Professor Jerry Murphy of the MaREI Centre for Marine and Renewable Energy want to see green energy being put to better use by the state, writes Graham Clifford

Powerful, dynamic, malleable and near constant the elements associated with the blue economy promise so much to island nations such as ours. Generation of ‘green’ energy is only half the battle though – what we do with it, is just as important.

At the MaREI Centre for Marine and Renewable Energy research, development, and innovation are ongoing each day of the year.

Conducting fundamental scientific research relating to marine and renewable energy applications and enabling the development and testing of technology through to the construction of demonstration systems, the Centre coordinated by the Environmental Research Institute (ERI) at University College Cork and supported by Science Foundation Ireland, has over 200 researchers working across six academic institutions collaborating with over 46 industry partners.

“In terms of driving more marine and renewable energy innovations, and looking at their impact, the centre has progressed a long way from our earlier days when the main focus was predominantly in the area of offshore wind, wave and tidal generation,” explains Professor Jerry Murphy, Director of MaREI.

He explains: “Of course that area is still very important and now we’re actually seeing a move towards floating offshore wind energy generators. The Oil industry has used floatation technology on their rigs for years and so its something we’re hoping to develop for wind energy generation as well.”

Constructing wind generating turbines which are mobile, rather than fixed, has the potential to maximise energy generation.

Also, of course, the MaREI centre works in the area of Tidal energy and supports companies in the design and innovation of new devices in this hugely important sphere. Professor Tony Lewis is a principal investigator at MaREI and is emeritus Beaufort professor at University College Cork. Last August he hosted the European Wave and Tidal Energy conference in Cork – regarded as one of the world’s leading forums for this sector.

MaREI is held in such high esteem as a world-leading institution when it comes to marine and renewable energy not just for its wide range of expertise but for its state-of-the-art unparalleled testing facilities also. MaREI offers unique world-class MRE testing infrastructure, structural laboratories, novel prototypes, and measurement equipment.

“Our wave emulators are more complex and advanced than perhaps anywhere else in the world,” explains Jerry Murphy, adding “we can even generate waves crossing over each other. All of this allows us to test in as close to the real sea conditions as you can get. In terms of research into marine and renewable energy we are very much leaders in our field and I think that’s certainly something Ireland can be proud of.”

But not only is the MaREI Centre focussing on the more traditional forms of marine renewable energy generation, namely in the areas of wave, wind and tidal but also looks at other sources of renewable energy such as seaweed and agricultural waste, to see if it can be of practical and scalable value in terms of producing green energy.

“We look at fish farms, at algae, at seaweed. Growing fish produces less carbon than growing beef, but is it viable? If not, why not? We ask those questions and seek to find out the answers,” says Murphy.

He continues: “We’re investigating the area of electrofuels – these could be crucial in the future as we attempt to lower our carbon production. Electrofuels are carbon neutral fuels made by storing electrical energy from renewable sources in the chemical bonds of liquid or gas fuels. The primary end vector is hydrogen but this can be converted to renewable gaseous or liquid transport fuels.”

It’s the integration of all concepts which has the potential to change the way our societies, businesses and lifestyles are facilitated from an energy point of view.

“It is incredibly exciting because now, more than ever before, the focus on renewable energy is intense and there’s far greater investment in this area.
A breakthrough in our research could have the potential to impact energy generation across the rest of the planet,” said Professor Murphy.

He also told the Sunday Business Post that efforts to decarbonise our country are handled carefully by MaREI staff when dealing with people and communities across Ireland.

“Communication and collaboration with stakeholders is very important. We can’t just ride in and say this new renewable option must replace something which has been in existence for generations. We have to listen to policy makers, industry and the concerns of locals and actively engage with communities to co-create new approaches to decarbonisation pathways. Success in this area must be accompanied with support from people and education and public engagement has become a major part of what we do.”

Headquartered in the new UCC ERI Beaufort Building in Ringaskiddy along with the Lir National Ocean Test Facility, MaREI brings together marine experts and researchers from across Ireland and abroad.

Horizon 2020 EU funding has been so important to the work of MaREI over the years.

And as Professor Murphy explains the impact of the centre’s research could have a substantial impact on all of our lives in the coming years.

“We’re very interested in technologies that are 10 to 15 years from commercialisation.
In our collaboration with Gas Networks Ireland for example, we see all future buses and lorries operating on biogas as opposed to diesel. Biogas, derived from methane in slurry tanks, is carbon negative. The more kilometres driven by the bus, the lower the emissions in the country. We are also looking at breweries and agricultural co-ops that use gas as an energy vector and that have a corporate identity of decarbonisation.”

And he told the Sunday Business Post that while renewable energy is a better alternative to traditional methods the challenges faced are complex. There is a preoccupation in Ireland with renewable electricity but it is too narrow and simplifies the issues. Only about 20% of our total energy consumption is in the form of electricity; heat and transport combined constitute the remaining ~80%. However, to date the production of renewable electricity has been the primary focus in Ireland with the majority of effort going to ramping up green electricity production from wind turbines.

“We’re all well versed on wind turbines and photovoltaic systems –We are heading to 40 percent renewable electricity on average over the year, which is great. However, when the wind blows and the sun shines, we can easily overproduce at specific time periods. Ireland is an island and, as such, cannot readily share electricity, compared with Germany, which has numerous countries on its borders. This can result in spillage and wastage of electricity unless we invest in extensive electricity storage solutions or interconnectors, which is expensive but necessary.”