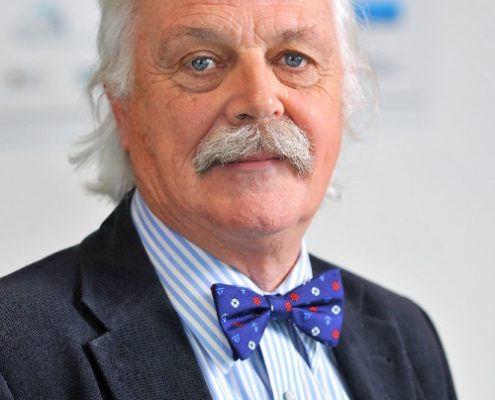 Global leaders in the field of marine renewable energy were in Cork on February 29th and March 1st to attend a 2-day symposium in honour of the ‘father of ocean energy’, MaREI’s Prof. Tony Lewis. The Lewis Symposium, hosted by MaREI, was held in recognition of the significant contributions made by Professor Tony Lewis to the field of Ocean Energy. “The Lewis Symposium is a celebration of a man who has dedicated his entire career to marine renewable energy. Professor Lewis has been one of the most active members of the Ocean Energy community for the past 4 decades. Through his teaching, research, industrial and ambassadorial roles he has become a great influencer in the Marine Renewable Energy (MRE) sector – which is why so many of his contemporaries have travelled to Cork for this event honouring him,” said Prof. Jerry Murphy, Director MaREI. “His legacy includes the MaREI Centre for Marine and Renewable Energy, which has over 130 researchers across 6 institutions working with 45 industry partners, and the LIR National Ocean Test Facility located in the new world-class Beaufort Building,” he added. “Tony saw the potential of our marine resource before many others and was instrumental in developing the MRE sector here.”
Speaking at The Lewis Symposium, Prof. Tony Lewis added: “Over the course of my career I have been privileged to have worked with people from all over the world researching and making real progress in the marine renewable energy sector. I am honoured that so many of them have travelled to Cork to celebrate what we have achieved so far. With a sea to land ratio of over 10:1, Ireland is one of the best locations in terms of marine renewable energy resources, but it is only in the last 10 years that we have started to get serious about the potential of marine renewable energy. I am honoured to have played a part in that and I look forward to the continued collaboration with my colleagues in Ireland and across the world,” he added.

As a result of his achievements Professor Lewis has recently been awarded Professor Emeritus status in University College Cork. Speakers and attendees were treated to a tour of the world-class UCC Beaufort Building which houses the MaREI Centre for Marine and Renewable Energy and the LIR National Ocean Test Facility.