Prof Jerry Murphy, director of the MaREI centre in Cork, believes we need new solutions to our urgent energy demands. 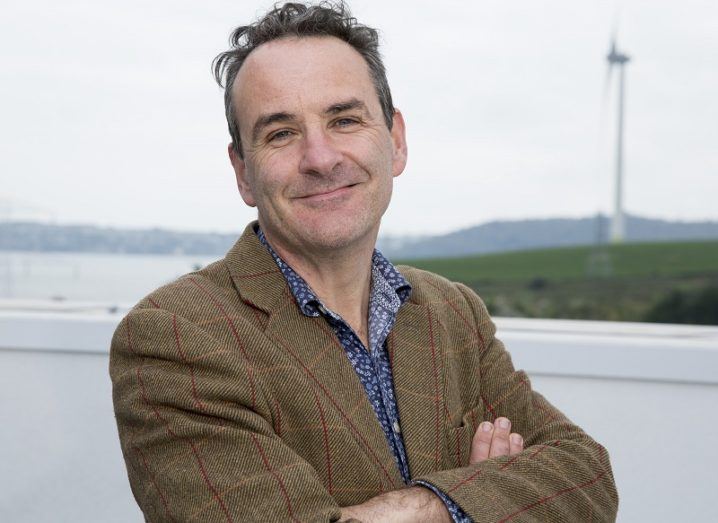 As part of the EU, Ireland has set itself a target that by 2020, 16pc of its energy production will come from renewable sources. However, a report last year found that we were far from likely to meet this demand, with only half of the target achieved.

This is of great concern to many in energy research, particularly Prof Jerry Murphy, director of MaREI (Centre for Marine and Renewable Energy) in Cork, which is funded by Science Foundation Ireland (SFI).

With a particular expertise in bioenergy and biofuels, Murphy is ranked among the most cited researchers worldwide in civil engineering, according to ShanghaiRanking’s Global Ranking of Academic Subjects 2016 by Elsevier.

Now, speaking with Siliconrepublic.com, Murphy believes his focus on natural, renewable fuels can help us make greater strides towards that 16pc target.

What inspired you to become a researcher?

From an early age, I have been fascinated by nature and environmental concerns. I wanted to be a zoologist but felt, in my case, I could have a greater impact as a civil engineer.

The engineering process is very much driven from a problem-solving perspective. I believe there is a huge role for a lot of different technologies, and struggle with both elitism (silver-bullet, single-technology perspectives) and technology-free solutions to sustainability. I strongly believe in the need for extensive engineering infrastructure to create a sustainable planet.

Can you tell us about the research you’re currently working on?

My bioenergy research team is investigating green gas technologies both from a laboratory perspective and a sustainability policy perspective. This involves:

In your opinion, why is your research important?

Ireland and the EU need to reduce carbon by a factor of five by 2050, which is an incredible ask [of a nation].

Ireland has close to 8m cattle, almost twice the number of people, making us a world power in cheese and milk products. However, of that number, 2m are slaughtered each year, resulting in a lot of waste.

Typically, we apply agricultural wastes to land, which can lead to contamination of our water supplies. Per capita, Ireland has a very significant amount of agricultural wastes/residues, which is also the reason why we have one of the largest greenhouse gas emissions per capita in the EU.

Many of these wastes are very suitable to anaerobic digestion, and countries such as Germany, Austria and Sweden have invested heavily in it. We are exploring this in a bid to reach 100pc green gas production.

What commercial applications do you foresee for your research?

As academics, we are very interested in technologies that are 10-15 years from commercialisation.

In our collaboration with Gas Networks Ireland, we see all future buses and lorries operating on biogas as opposed to diesel. Biogas, derived from methane in slurry tanks, is carbon negative. The more kilometres driven by the bus, the lower the emissions in the country.

We are also looking at breweries and agricultural co-ops that use gas as an energy vector and that have a corporate identity of decarbonisation.

We are very interested in power-to-gas concepts and have developed a microbial fauna that converts CO2 and hydrogen into methane. This will allow for a decentralised electricity storage mechanism, which includes for carbon sequestration.

What are some of the biggest challenges you face as a researcher in your field?

We are heading to 40pc renewable electricity on average over the year, which is great. However, when the wind blows and the sun shines, we can easily overproduce at specific time periods.

Ireland is an island and, as such, cannot readily share electricity, compared with Germany, which has numerous countries on its borders. This can result in spillage and wastage of electricity unless we invest in extensive electricity storage solutions or interconnectors, which is expensive.

Are there any common misconceptions about this area of research? How would you address them?

Bioenergy is needed to facilitate intermittent renewable electricity. It is needed because we can turn it on and off, and is needed for transport biofuel.

What are some of the areas of research you’d like to see tackled in the years ahead?

I would like an emphasis on the broader integrated energy environment system. I would like us to embrace the complexity of sustainability and to enjoy the multiple solutions and the many different disciplines required to solve our problems.

This is the rationale for the MaREI centre. We have 200 researchers across all disciplines and technologies in the marine and energy space in six universities in Ireland, and 46 industrial partners.

We examine renewable energy technologies, their cost of energy, their environmental impact, the legislation required to put these in place, and their optimal operation and management.