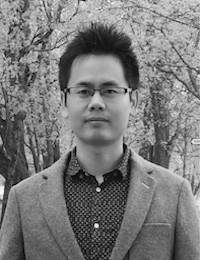 Dr. LiGuo Wang is working on modelling, control, and optimization of a hinge-barge wave energy converter