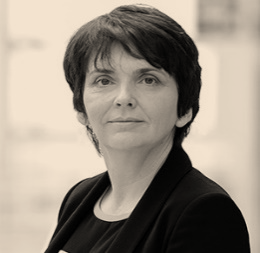 Professor Feely holds a BE degree from University College Dublin (UCD) and MS and PhD degrees from the University of California, (UC) Berkeley, where her PhD thesis won the David J Sakrison Memorial Prize for outstanding and innovative research.  While at UC Berkeley, she also won the Outstanding Graduate Student Instructor Award. Her research is in the area of nonlinear circuits and systems, and she has been awarded research grants and prizes from a number of national, international and industry sources.

Professor Feely is a Member of the Royal Irish Academy and a Fellow of the IEEE (Institute of Electrical and Electronics Engineers), Engineers Ireland and the Irish Academy of Engineering.

She has served as Chair of the Irish Research Council, the EU Advisory Group on Marie Skłodowska-Curie Actions, and the IEEE Technical Committee on Nonlinear Circuits and Systems, and as a member of a number of Editorial Boards. She is a director of the BT Young Scientist and Technology Exhibition and Deputy Chair of the Higher Education Authority. She became a Fellow of Engineers Ireland by Presidential invitation in 2012.

Inaugurated as Vice-President of Engineers Ireland in 2019, Professor Feely will now hold the position of President for the organisation’s 2021/2022 session.

Also inaugurated to the role of Vice-President at the professional membership body’s AGM was Professor Edmond Harty, Adjunct Full Professor at the UCD School of Biosystems and Food Engineering and Chair of the Board of Directors of AgriTech Centre of Excellence, a Governor of the Irish Times Trust, and the Chair Board of Governors at Pallaskenry Agricultural College.