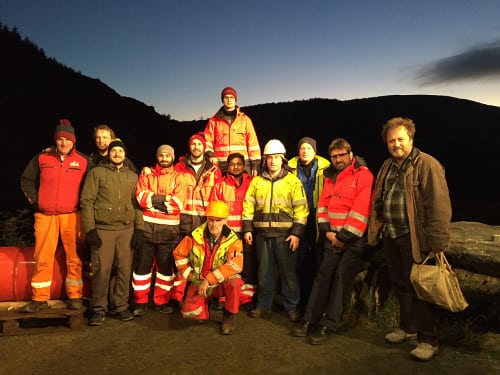 The Mobile & Marine Robotics Research Centre (MMRRC) and the Marine Institute participated in the Work Class ROV trials, granted earlier this year as a part of the Marine Institute – 2016 Shiptime Programme. The trials were held near Portroe, in a disused quarry, from 21 – 25 November 2016. The quarry, now flooded by a freshwater spring, offers great visibility, a variety of depths, and an interesting assortment of sunken things, such as the old quarry workings, and a bar with taps and mannequins around it.

MMRRC researchers: Gerard Dooly, Satja Sivcev, Matija Rossi, and Petar Trslic; successfully tested various parts of research projects we are currently developing in MMRRC: an autonomous underwater robotic arm, which helps human ROV pilots to perform challenging tasks by using autonomous robotic systems, and a real-time 3D reconstruction algorithm, using 2 sonars and a number of cameras to reconstruct the underwater scene and aid in the navigation of the robots in the scene.