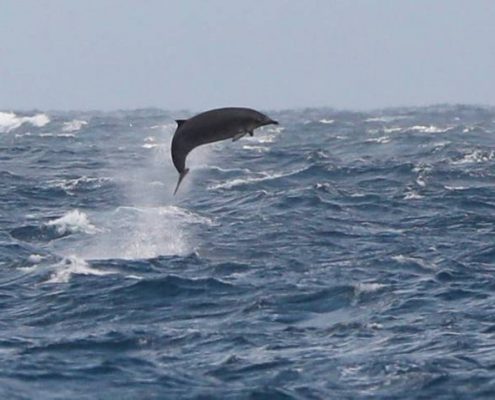 MaREI researchers were amongst Irish scientists who spotted elusive beaked whales off the coast during a recent survey.

The team on board the RV Celtic Voyager spotted four separate groups of the mammals within a couple of hours near the Rockall Trough. Very little is known about beaked whales, as they are rarely encountered at sea and are shy around vessels.

The researchers had been seeking to characterise the beaked whale habitat using acoustic technology.

They were also attempting to record oceanographic information like depth, salinity, temperature and the other marine species in the area.

However, they were surprised to actually see the whales because they are rarely spotted at sea due to their shyness around vessels.

Although they could not be sure, the scientists think they saw either Sowerby or True Beaked whales – two of the four beaked whale species.

Among the group of scientists was researchers from NUI Galway, UCC, Marine Institute, Centre for Marine and Renewable Energy, Marine Conservation Research and Washington State University.

“We had seen a group of breaching beaked whales the previous day and upon finishing up our acoustic transects decided to return to the area we had sighted them in previously,” said Dr Ailbhe Kavanagh from MaREI at UCC.

“While steaming through this area we encountered four groups of beaked whales, all breaching, and all groups of between two to four individuals.”

The whales are capable of diving as deep as 2500 metres below the surface for an hour at a time to feed on squid and deep sea fish.

The survey which took place between the 29 October and the 6 November and was funded through the National Research Vessels SHIP-TIME programme.