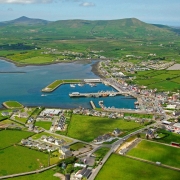 Exploring the transition to a low carbon future 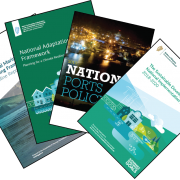 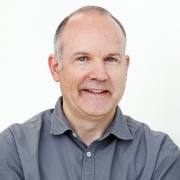 He has received the funding for a study focused on improving our understanding of the physics and dynamics of breaking ocean waves to develop more accurate operational wave models.

Such models could help to improve wave forecasting models, improve criteria for the design of ships and coastal and offshore infrastructures and quantify air-sea gas transfer. #HIGHWAVE #ercadg pic.twitter.com/GM5yH3CXTP

Such models could help to improve wave forecasting models, improve criteria for the design of ships and coastal and offshore infrastructures, help to quantify seabed erosion by powerful breaking waves and quantify air-sea gas transfer. The ability to quantify CO2 transfer velocities is key to predicting future climate.

Professor Dias, who is a researcher in the UCD School of Mathematics and Statistics and in the UCD Earth Institute, has received this latest ERC funding for a 5-year study, entitled, ‘HIGHWAVE – Breaking of highly energetic waves.’.

Professor Dias is also a principal investigator with MaREI, the SFI Research Centre for Marine and Renewable Energy, a member of the Royal Irish Academy, and holds a position at Ecole Normale Supérieure Paris-Saclay, France.

The funding will result in the establishment of 6 new research positions (PhD students and post-doc researchers) at the University.

A central element of the work builds on recent international developments in the field of wave breaking by Professor Dias that provide the first universal criterion for predicting the onset of breaking waves in uniform water depths from deep to intermediate.

Professor Frederic Dias said, “I am thrilled to receive this ERC Advanced Grant which will allow me and my team to further explore fundamental open questions in the field of wave breaking. Our goal at the end of this study is to develop more accurate operational wave models and to better parameterise CO2 transfer velocities by taking into account sea states and not only wind speed.”

“Such models will have practical and economic benefits such as improving sea state forecasting; evaluating seabed response to extreme waves, determining structural loads on ships and offshore infrastrutures and optimising operational strategies for maritime and marine renewable energy enterprises.”

He added, ”The funding will also enable me to build an interdisciplinary team of talented post-docs and PhD students in areas such as coastal and ocean engineering, earth system science, statistics, and fluid dynamics.”

Professor Dias is one of 222 top researchers and scientists from across Europe, who between them will receive ERC Advanced Grants worth a total of €540 million, as part of the Horizon 2020 research and innovation programme. This funding will give recipients the opportunity to build up their teams and have far-reaching impact.

ERC Advanced Grants are awarded under the ‘excellent science pillar’ of Horizon 2020, the European Union’s research and innovation programme. Awardees are exceptional leaders in their field with track records of significant research achievements in the last ten years.

The ERC evaluated 2,052 research proposals in this latest competition, almost 11% of which were selected for funding. The grantees will carry out their projects at universities and research centres in 20 countries across Europe. The grants could lead to the creation of an estimated 2,000 new jobs for postdocs, PhD students and other staff working in the grantees’ research teams.

Professor Orla Feely, UCD Vice-President for Research, Innovation, and Impact said, “I would like to congratulate Professor Dias on receiving his second ERC Advanced Grant. His success for a second time in this prestigious and highly competitive Europe-wide funding call indicates the quality of the world-class fluid dynamics research which he and his team are carrying out at UCD and I wish them continued success.”

“The ERC Advanced Grants fund well-established research leaders with internationally renowned track records. Only three Ireland-based researchers have now been successful in securing a second ERC Advanced Grant and two of them, Professor Kenneth Wolfe and Professor Dias are based at UCD. This signifies the strength of the research taking place at our University.”

Carlos Moedas, European  Commissioner for Research, Science and Innovation, said: “The ERC  Advanced Grants back outstanding researchers throughout Europe. Their pioneering work has the potential to make a difference in people’s everyday life and deliver solutions to some of our most urgent challenges.  The  ERC  gives  these bright minds the possibility to follow their most creative ideas and  to play a decisive role in the advancement of all domains of knowledge”

The President of the European Research Council Professor Jean-Pierre Bourguignon, said, “Since 2007,  the European Research Council has attracted and financed some of the most audacious research proposals, and independent evaluations show that this approach has paid off.  With this call, another 222 researchers from all over Europe and beyond will pursue their best ideas and are  in an excellent position to trigger breakthroughs and  major scientific advances.”

He added, “Had the ERC budget been higher, more brilliant ideas could have been supported in Europe. I hope that the next EU framework programme for research, Horizon Europe, will make this possible. There  is certainly more room at the top.”

Further details on the latest ERC Advanced Grant Awards are available via https://erc.europa.eu/news/erc-2018-advanced-grants-results. 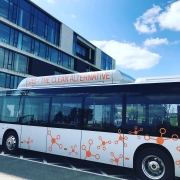 With zero carbon emissions, the biomethane-powered bus is a viable alternative for Ireland’s public bus fleet, and the biogas bus has been part of national trials looking at green bus performance, air quality impacts and CO2 emissions, among other criteria.

Biomethane is a clean, renewable gas that is 98% methane. Also known as green gas, it can be used interchangeably with conventional fossil-fuel natural gas, meaning it can be added to the existing gas grid. The majority of European capital cities now run their buses on gas, resulting in lower carbon emissions and better air quality in cities.

“Energy Cork has been advocating the benefits of adopting compressed natural gas and biomethane for our public bus fleet in Cork for a number of years, so we are delighted to be making a journey today on Ireland’s first zero carbon emissions bus. Never has the demand for public transport been greater in Cork with the city centre expecting an additional 10,000 jobs in the next 5 years. We have the opportunity now to shape how we grow and be proactive in adopting technologies that work for the City and which protect our environment and air quality. This technology is tried and tested with examples of biomethane bus fleets in Stockholm, Lille and Nottingham to name just a few cities. We are very keen to see this technology supported by the National Transport Authority and hope to see these buses rolled out in Cork in the not too distant future,” said Michelle O’Sullivan, Energy Cork spokesperson and Cork Chamber Public Affairs Senior Executive.

Faced with EU deadlines to reduce harmful greenhouse gases, and following Budget 2018, Ireland will no longer be able to purchase diesel buses for public transport as of 1st July 2019.  The Department of Transport, Tourism & Sport has been carrying out technology trials of hybrid diesel, fully electric, electric hybrid, compressed natural gas (CNG) and biomethane powered buses in Cork and Dublin in recent months to review performance. The green buses have been travelling key routes in the urban bus transport network, but have been weighted rather than carrying passengers so today represents a landmark in Ireland’s move to a greener public transport system.

The first passenger bus journey of its kind in Ireland will pick up from Lapps Quay in Cork city and travel to the SFI funded Centre for Marine and Renewable Energy (MaREI) in Ringaskiddy where passengers will have the opportunity to gain insights from leading gas and algal biofuels researcher Professor Jerry D. Murphy on the research and focus of the work ongoing.

UCC Prof. Jerry Murphy of MaREI added, “Our research in collaboration with Gas Networks Ireland is focussed on greening of transport fuel through circular economy routes. We see agri-slurries and municipal wastes converted to biogas which can then be used to fuel buses and lorries in place of diesel. The biogas systems can operate as waste treatment systems, whilst reducing GHG emissions on the farm, producing biofertiliser, displacing diesel, emitting no harmful emissions in combustion resulting in better air quality in cities.  This demonstration represents a significant step forward in delivering a sustainable renewable fuel for Irish transport.”

Energy Cork, which brings together Cork City Council, Cork County Council, Gas Networks Ireland, Bus Eireann, Cork Chamber and other regional stakeholders, has been working closely to garner support for green bus routes throughout the city and county. Following the success of Drive4Zero, which incentivised Cork commuters to switch to electric cars, Energy Cork believes that green buses are vital to the sustainable infrastructure and development of Cork in the future.

Biomethane is a naturally occurring renewable gas produced by the anaerobic digestion of organic materials and residues from agriculture, food production and waste processing. It can be produced biomethane from slurry, sewage, red meat processing waste, residues from breweries and distilleries, food waste, and farm manure. Biomethane not only generates energy, but also supports a more circular economy through the use of waste as a resource. 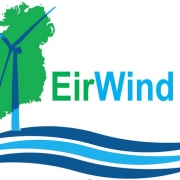 Co-designing opportunities towards the development of Irish offshore wind