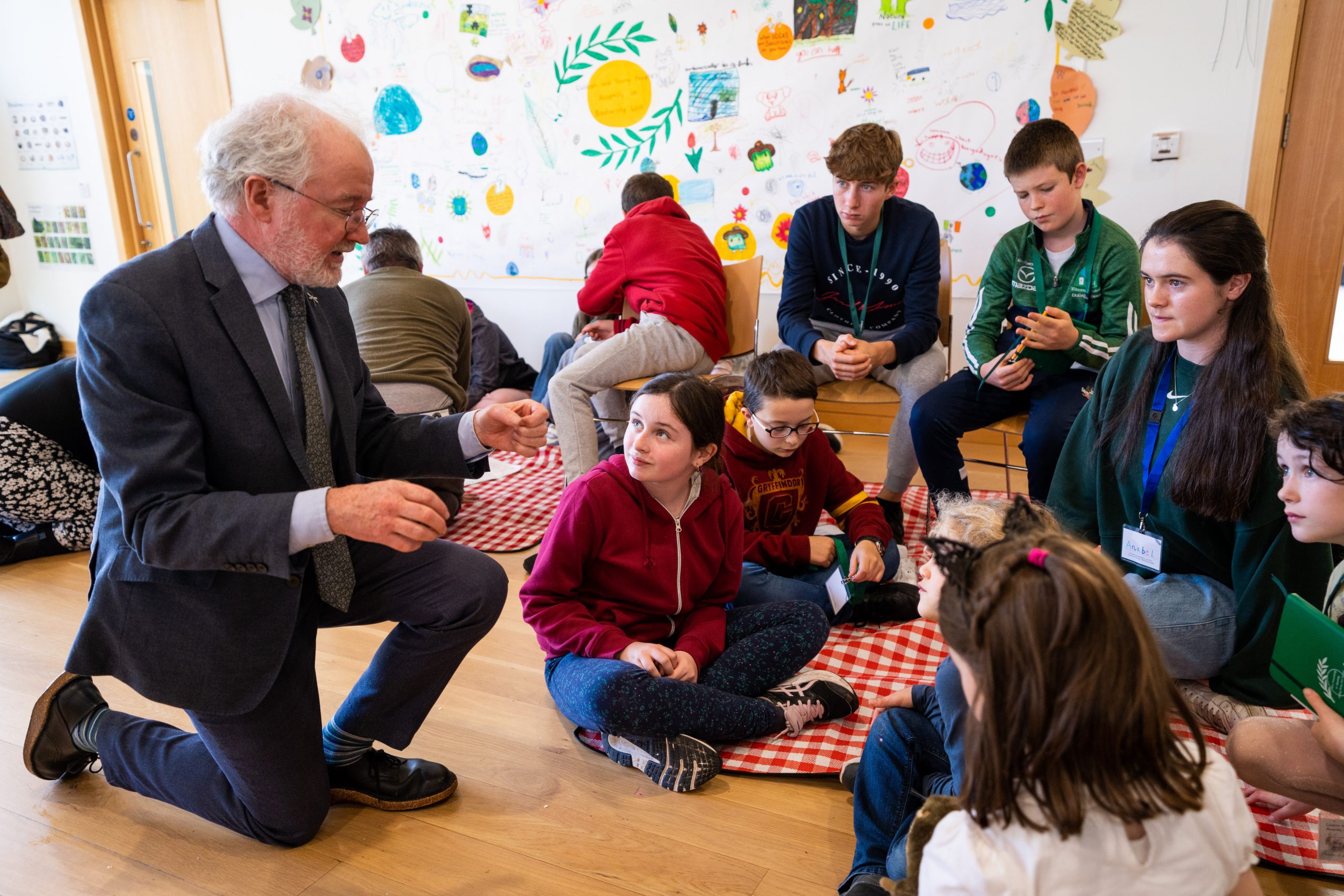 Members of Ireland’s first Children and Young People’s Assembly on Biodiversity Loss presented their calls to action to Malcom Noonan TD, Minister of State for Heritage and Electoral Reform, in Killarney National Park yesterday, following two weekends of deliberation on the topic.

The Assembly aimed to ensure Ireland’s youngest citizens have their say in how Ireland responds to the challenge of biodiversity loss, given that it poses a significant threat to children’s right to a healthy environment. Over 500 children and young people aged 7-17 years applied to be part of the special assembly, of which 35 were selected representing a diverse cross-section of society. Assembly Members from across Ireland came together over two weekends in October in the beautiful settings of Wicklow and Killarney National Park to explore, discuss and create recommendations on how to protect and restore biodiversity in Ireland.

The Assembly came up with six key messages under which their list of calls to action and recommendations fall:

1. We must treat the earth like we do our family and friends, and give the earth the right to be treated with kindness and respect.

2. Future generations must live in a world where there isn’t a crisis and where children don’t have to take action because of the incapability of past generations.

4. Children and young people must be included in decisions being made about biodiversity.

5. Biodiversity protection must be a shared responsibility, and a global, collaborative effort.

6. We must consume resources in a sustainable, moderate way that neither diminishes the environment/biodiversity, or our rights, wellbeing and livelihoods.

I ❤ the @hazelahurley representation of me at today’s final gathering of @cypbiodiversity in Killarney.

It was emotional listening to the feedback of the children and young people on five thematic areas of drivers of #biodiversity loss. pic.twitter.com/oKpQXiW6Ve

Your participation in this assembly and the work you have done is unique and so important to us in helping to shape our future. I want you all to be assured that your recommendations will help to inform strong policies for nature protection and restoration so that you can see nature thrive again. I know that there is a big job of work to do, and I feel the responsibility of it.

I am so impressed by your deep understanding of biodiversity and how it connects with the impact of our daily activities - how we live, how we move, how we eat, how we work… Like you, I believe that by working together and trying to make better decisions for nature, we can have the collective response needed to turn the tide on biodiversity loss.
Malcom Noonan
Minister of State for Heritage and Electoral Reform 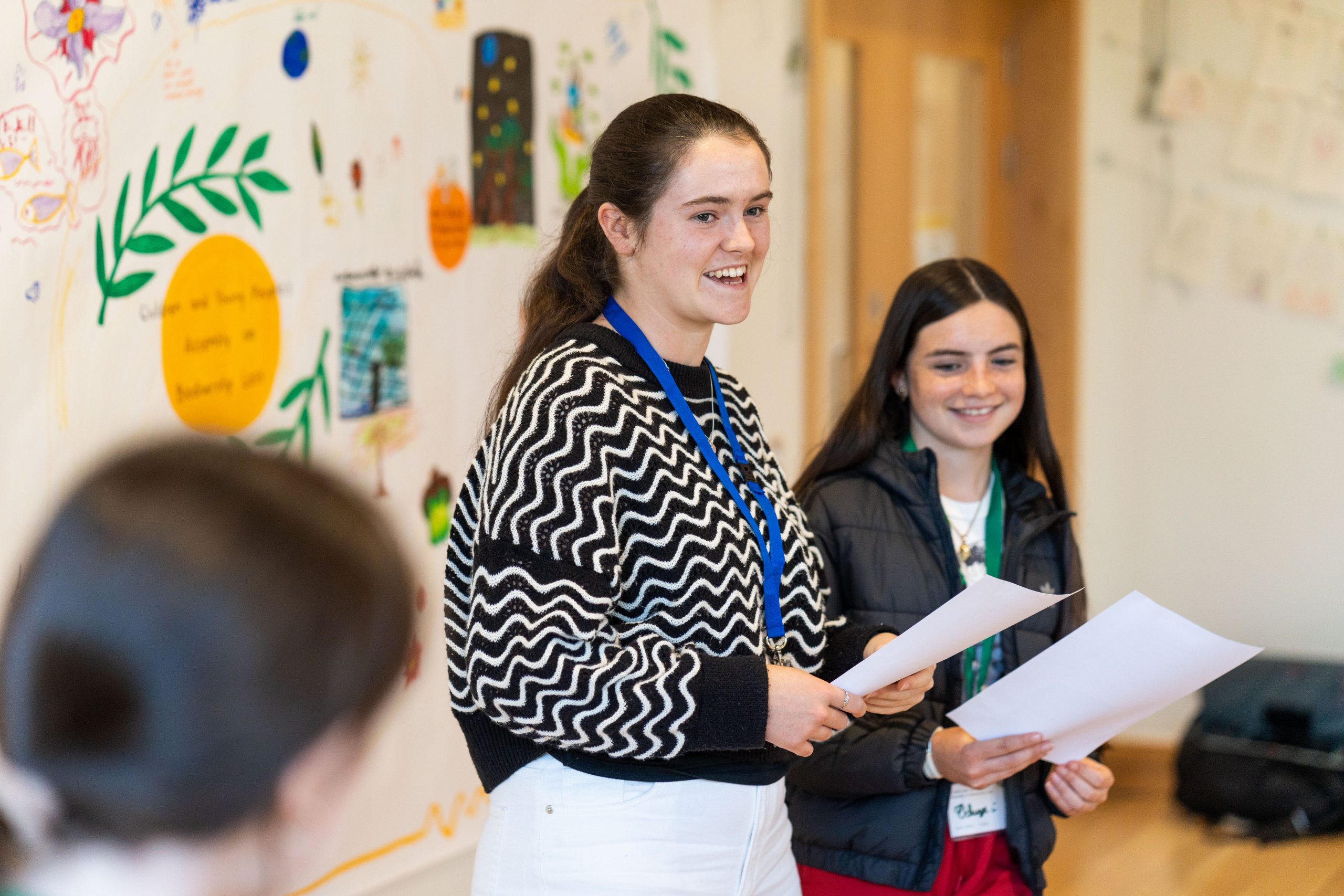 The young members came up with 58 calls to cation across 7 themes including education and awareness raising, governance, restoring and rewilding, habitat and species protection, energy and transport, overexploitation, and waste and consumption.

The Children and Young People’s Assembly aimed to inform the Citizens’ Assembly on Biodiversity Loss, which is taking place over the course of this year, tasked by the Oireachtas with examining how the State can improve its response to the issue of biodiversity loss.  Art O’Leary, Secretary-General of the Citizens’ Assembly, also travelled to meet with the young Assembly Members and invited them to present their recommendations to the Citizen’s Assembly at its upcoming meeting on 5-6 November. The outcome of the two assemblies will inform the development of Ireland’s next National Biodiversity Action Plan.

I like to think of the earth like a person and they are in trouble and so we should protect them. We shouldn’t be hurting our planet, we should be caring for it and should treat it like we do our family and friends

Esther
aged 10
Assembly Member from Co. Cork
It’s really important that young people deliver these arguments as we are the future. It’s time that we saw the action that is needed.

Amhairghin
aged 15
Young Advisor from Co. Donegal and Co. Down

The Assembly’s design and operation was designed by an intergenerational team consisting of a Young Advisory Team and an independent research consortium. The Young Advisory Team comprises nine children and young people from across Ireland, aged 8-16. The research consortium includes experts in children’s participation, deliberative democracy, and biodiversity from Dublin City University, University College Cork, and terre des hommes, an international organisation with a focus on children’s environmental rights.

The process mirrored a deliberative citizen assembly, with a learning phase, discussion phase and decision phase, with facilitators ensuring all voices and views are captured. The assembly meetings included nature walks and outdoor activities in the inspiring surroundings of the Wicklow and Killarney National Parks.  A range of creative facilitation techniques were employed to engage the children and young people including role play, visioning, and community mapping, as well as a graphic artist working with the members to co-create a mural on their ideas and calls to action. 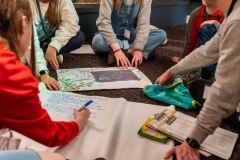 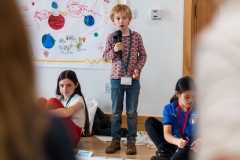 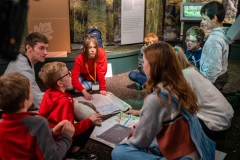 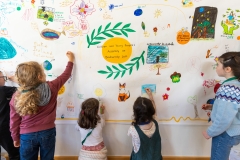 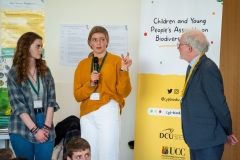