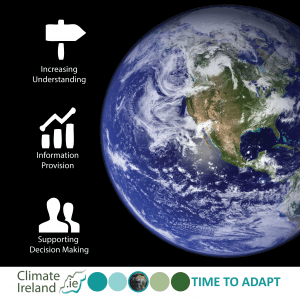 Led by Irish Centre for High-End Computing (ICHEC) with UCC as a partner this project has the following interlinked components:

Part (1) is key to the policy goal of adaptation support for the National Climate Change Adaptation Framework. Hence while described as a 1–‐year project, the aim is to put the ICIP on a secure infrastructural footing for maintenance and support later by national funding. Part (2) is similarly a continual goal to add the results of ongoing EPA climate change research into the platform. Datasets produced by climate change modelling in EC–‐Earth, in previous projects for Met Éireann and EPA (the CMIP5 Coupled Model Inter-comparison Project 5) results as well as upcoming CMIP6 results planned from Climate Change Project 9 will be integrated here, along with results from FP6/FP7 ENSEMBLES and CORDEX results used previously in Phases I and II of the ICIP. Part (3) will add new tools and “look and feel” to the project. This will primarily occur in cooperation with the Phase III Content Project, although some changes to the presentation layer called for by Part (2) will be undertaken at ICHEC.